So here's part one of my list of crafty things I want to complete this summer. It's not an exhaustive list; I'll probably (read definitely) add to it in my head, and I know I'll never get half of it done, but oh well! 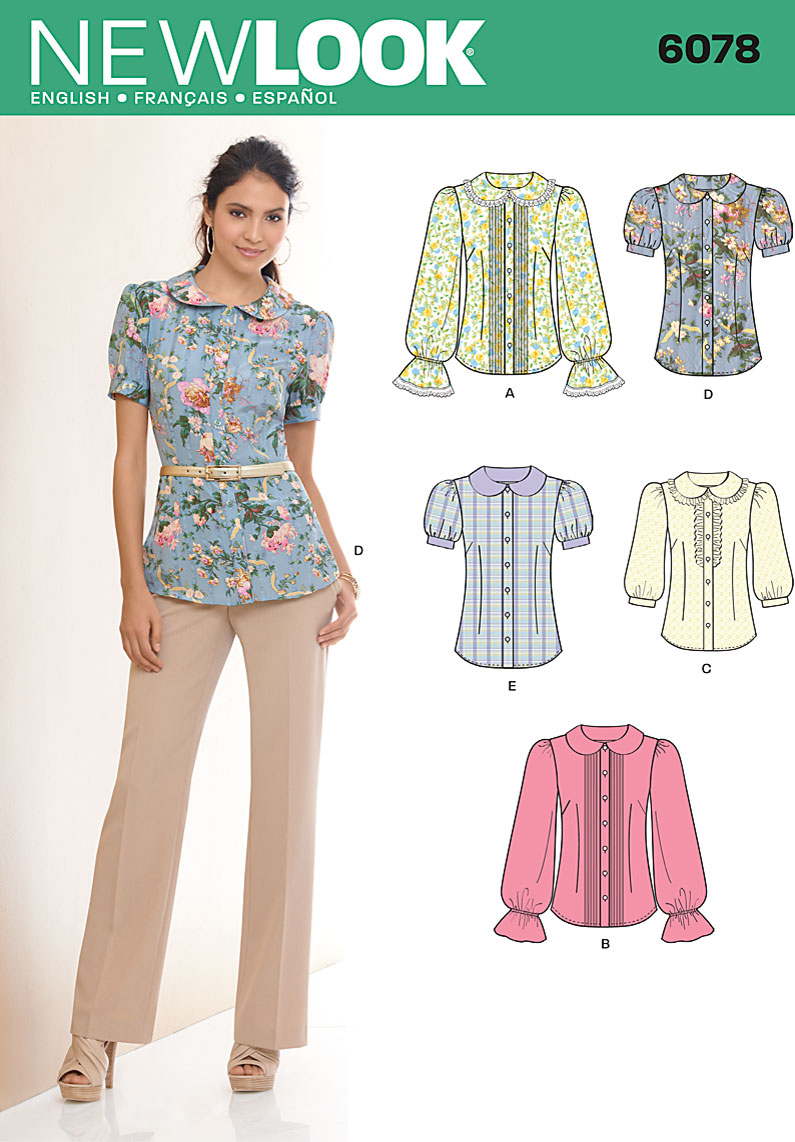 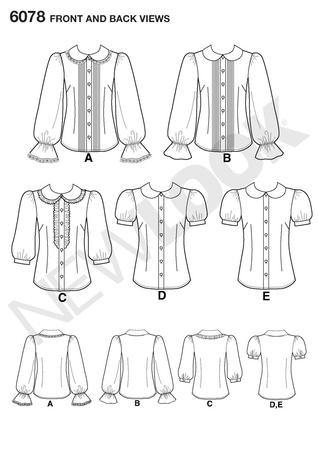 The first thing is to finish the blouse I started sewing over Christmas. To be exact, my first blouse ever. Also the second piece of clothing I've ever made from scratch and third clothes sewing project ever. Clearly, I'm not one to mind being thrown in at the deep end. I'm making it an a relatively cheap poly satin, in a lovely light purple shade. The funny thing is, I can't for the life of me remember which view I was doing haha! It'll come back to me once I get it out again though.

So far, it hasn't been too difficult. As far as I remember, I've got all the darts done, side seams done, and one side of the button placket. I had surprisingly little trouble with it considering my complete lack of expertise, although the instructions were a tad confusing (cue an hour or so sat with my dad reading them over and fiddling with the pattern pieces only for that moment of realisation, "Oh-oh, that's what they meant! Well why didn't they just say so?" I even made sure to finish the edges of the seams with a zigzag stitch, and to be honest, I'm quite proud of the way it's turning out. I did have a bit of an 'arghh' moment though- I was ill with a chest infection and really tired but still somehow thought it'd be a good idea to be sewing at about ten o'clock at night. Which inevitably meant I sewed back to front or upside-down or something equally stupid, and had to rip out the stitches. And then did the exact same thing again. And then because I was getting frustrated I somehow managed to get the thread stuck, the material sucked halfway into the machine, and I was pretty sure the only way out was to just cut it out and scrap it completely. I'm so so glad I didn't, because my dad managed to open up the sewing machine in the morning and fix it, and the blouse came out a bit wrinkled, but without even a mark!

I was originally wanting to change the collar on this and make a scalloped one like the one here instead, but then I sort of slowed down and thought about it a bit. To be fair, it's already quite an ambitious second project, so I figured I'd just make it, as is. If I'm happy with the finished blouse, I guess my next project (or one of them) could be a scalloped collar version, no?

I've just bought a load of yarn that I'm going to make into a jumper. I'm not exactly sure what pattern I'm going to use yet, or actually if I'm even going to use a pattern. I've never actually followed a knitting pattern as is, you see, and the only other jumper I've made was done completely without a pattern, just a bit of maths and my measurements. This one, however I end up deciding to do it, is going to be more along the lines of a vintage jumper than a modern shape, simply because I think it's going to be much more flattering on me. Also, I've been admiring all the other pretty jumpers I've seen over the internets lately. Basically, it'll be something like this sort of shape: 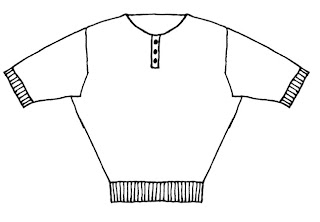 The yarn that I've chosen is nice grey colour, along with a couple of extra balls in white and purple (you can tell purple's my favourite colour, can't you?) in case I decide to do some kind of colour work- and I probably will! 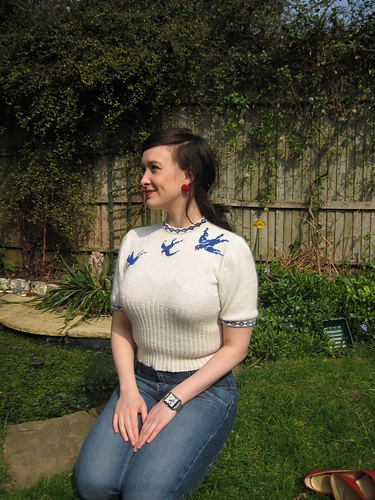 I did start a vintage pattern a while ago actually, but stupidly didn't buy enough yarn in the right colour :( I do have more in another colourway, though, so I guess I'll just have to bite the bullet and alter the pattern to use that instead. It's a real shame- the original design is so cute! But oh well, that'll teach me to buy more than enough yarn in future...

This post is becoming kinda big.. so I'm gonna spilt it here- there's so much I have planned and I suppose I should really get cracking! Stay tuned for more next time though, and in the meantime- what are your summer crafting plans? Anything special going on?

I'm finding it slightly difficult to know what to post on here, not because I've got nothing to write about, but because I'm sort of lacking the motivation to get on with a lot of the projects I've got in mind. I know I'm not the only one who does this sort of thing; Tasha from by gum, by golly! recently wrote a post on getting over a crafting slump, and there were plenty of replies saying they'd had much the same sort of thing as well.

I've been thinking about why in particular I'm lacking motivation, and I think it's just because I'm a bit burnt out by all the things that've been going on in my life lately (and all the things I've got to do over the next few weeks). There's been so much been going on that I haven't had any time to just relax and do my own thing; but now that I have a bit of respite rather than doing these things I want to do I seem to just end up vegetating. So... I've decided that what I really need is to just make myself motivated, and the best way to do that is to just get on with it, even if it's just with small stuff.

So the other day, whilst I was watching Silk (a really good drama about life at the Bar), I did a bit of  hand sewing, and made a couple of stuffed felt shapes. It's not my usual kind of project, but it was actually quite fun, and for once I felt productive, even if there isn't any real use for them haha!

I'm also drawing up a to-do list; mainly things I've already started or have had in mind for a while now, although I'm sure to add to it as I go along. I'll have it up sometime this week and hopefully it'll provide a bit of much needed motivation for me :)

I think I'm going to try stealing Casey's idea  from Tasha's post; trying to do a little bit at a time is a whole lot better than procrastinating because I can't stand the idea of a huge project all at once. I'm not sure I'll ever actually manage to stick to doing a little bit every day, but maybe every week is at least a start, right?

Have you ever have trouble motivating yourself to do sewing/crafting projects? Any tips on how you work through it?
Posted by Rhi at 22:55 No comments:

This is a sort of unusual first post, really. My main purpose for starting this blog is to document my sewing/knitting general arty crafty projects, but I haven't really had time to do any of those lately. What I have been doing is looking through other blogs, and seeing a lot of really cool inspiration posts. I know I risk this becoming a completely different blog to the one I've had in mind, but hopefully I can magange to mash together some of my own inspirational/ general musings posts along with the sewing stuff/ tutorials etc. that I have planned. With that in mind, onwards, I say!


I've been admiring these shoes by American Duchess, and thinking that they'd look really good, if a little quirky, even in 'everyday' clothes today. They're perhaps not the kind of thing you can immediately see yourself wearing, which I sort of have to admit is a lot of the appeal for me. I'd like to be able to wear them though, even if they're completely not in my price range or at all the kind of thing I'd normally buy. They've got a presale going on at the moment, if you want to have a look though! 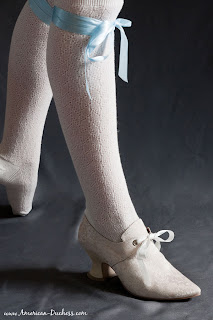 The picture on the right sort of reminds me of ballet shoes; this might have more to do with the model's pose than the shoes themselves, although I'm not complaining!

On second thoughts, it might have to with the fact that it reminds me a bit of Louis XIV. For around thirteen or fourteen years, I danced regularly every week, and I have always had a real interest in both the actual dance and the costuming. When I was younger, my parents gave me a really good book about the history of ballet, and there was a brilliant picture of the Louis in full ballet costume.

Needless to say, it was a tad different to modern ballet dress! I think what struck me about these shoes was the similarilty in style to the shoe Louis was wearing in the picture. I didn't have much idea about when he lived, either, so I was pleasantly surprised when a quick google revealed that the dates for his reign and the shoe inspiration at least vaguely match up!

All this has  seriously reminded me that I need some proper, decent shoes. All of mine seem to be Primark bought, cheap, flat and really bad for my feet; I definitely need to rectify and find some which are both better looking and more sturdy...

How do you feel about these shoes? Would you wear them on a day to day basis? Or are they something to be admired but worn only as costume?
Posted by Rhi at 13:19 No comments:

Maths student, craft nerd, music lover, artist.
Hi!
I’m Rhi, and welcome to my little corner of the internet. A bit about me- I’m kind of a mixed bag really; I’m currently a second year maths student but in my free time I’m a complete craft nerd! Dressmaking, stitching, reading, writing, portraiture, music and fashion are just a few of the things I’m into- I like to try a bit of everything.
I’m starting this blog as an attempt to get my thoughts in order, and as a way to keep track of all the things I love; sewing projects, knitting, crochet, embroidery, drawing and whatever else I decide to try!  I’m hoping that it’ll force me to be much more proactive and actually get on with all the projects/ ideas that have been building up in my head for so long…
I hope some of you out there in the big wide world of the internet find my projects and general ramblings interesting, and sometime in the future I should be able to get some tutorials up so you’ve got something to look forward to haha!
Stitcherhi xx
Posted by Rhi at 12:27 No comments: